This text is part of a philosophy of science  analysis of the case of the  oksimo software (oksimo.com). A specification of the oksimo software from an engineering point of view can be found in four consecutive  posts dedicated to the HMI-Analysis for  this software.

In formal logic exists the concept of logical derivation ‘⊢’ written as

saying that one can get the expression e out of the set of expressions E by applying the rules X.

Thus given an initial set of expressions ES one can derive a whole sequence of expression sets Ei by applying the change rules.

While all individual expressions of the start set ES are by assumption classified as true it holds for the derived sets of expressions Ei  that these expressions are correct with regard to the used change rules X but whether these sets of expressions are also true with regard to a given  situation Si considered as a possible future state Sfuti has to be proved separately! The reason for this unclear status results from the fact that the change rules X represent changes which the authoring experts consider as possible changes which they want to apply but they cannot guarantee the empirical validity for all upcoming times   only by thinking. This implicit uncertainty can be handled a little bit with the probability factor π of an individual change rule. The different degrees of certainty in the application of a change rule can give an approximation of this uncertainty. Thus as longer the chain of derivations is becoming as lower the assumed probability will develop.

The human actors can describe a given situation S as part of an environment ENV as a set of expressions ES which can be proved with makedecidable() as true. By defining a set of change rules X and a simulator Σ one can define  a formal derivation relation ⊢Σ,X which allows the derivation of a sequence of sets of expressions <E1, E2, …, En> written as

FROM THEORY TO ENGINEERING

AS described in part 1 of the philosophy of science analysis of the oksimo behavior space it is here assumed — following  the ideas of  von Uexküll — that every biological species SP embedded in a real environment ENV transforms this environment  in its species specific internal representation  ENVSP which is no 1-to-1 mapping. Furthermore we know from modern Biology and brain research that the human brain cuts its sensory perceptions P into time-slices P1, P2, … which have durations between about 50 – 700 milliseconds and which are organized as multi-modal structures for further processing. The results of this processing are different kinds of abstracted structures which represent — not in a 1-to-1 fashion — different aspects of a given situation S which   in the moment of being processed and then being stored is not any longer actual, ‘not now’, but ‘gone‘, ‘past‘.

Thus if we as human actors are speaking about change then we are primarily speaking about the difference which our brain can compute comparing the actual situation S being kept in an actual time-slice P0 and those abstracted structures A(P) coming out of preceding time slices interacting in many various ways with other available abstracted structures:  Diff(A(P0), A(P)) = Δint. Usually we assume automatically that the perceived internal change Δint corresponds to a change in the actual situation S leading to a follow-up situation S’ which differs with regard to the species specific perception represented in Δint as Δext = Diff(S, S’). As psychological tests can  reveal  this automatic (unconscious) assumption that a perceived change Δint corresponds to a real external change Δext must not be the case. There is a real difference between Δint, Δext and on account of this difference there exists the possibility that we can detect an error  comparing our ideas with the real world environment. Otherwise — in the absence of an error —  a congruence can be interpreted as a confirmation of our ideas.

As described in the preceding posts about a decidable start state S and a vision V  it is possible to map a perceived actual situation S in a set of expressions ES={e1, e2, …, en }. This general assumption is valid for all real states S, which results in the fact that a series of real states S1, S2, …, Sn is conceivable where every such real state Si can be associated with a set of expressions Ei which contain individual expressions ei which represent according to the presupposed meaning function φ certain aspects/ properties Pi of the corresponding real situation Si.  Thus, if two consecutive real states Si, Si+1 are include perceived  differences  indicated by some properties then it is possible to express these differences by corresponding expressions ei as part of the whole set of expressions Ei and Ei+1. If e.g. in the successor of Si one property px expressed by ex  is missing which is present in Si then the corresponding set Ei+1 should not include the expression ex. Or if the successor state Si+1 contains a property py expressed by the expression ey which is not yet given in Si then this fact too indicates a difference. Thus the differing pair (Si, Si+1)  could correspond to the pair (Ei, Ei+1) with ex as part of Ei but not any more in Ei+1 and the expression ey not part of Ei but then in Ei+1.

The general schema could be described as:

Between the real dimension and the symbolic dimension is the body with the brain offering all the neural processing which is necessary to enable such complex mappings. This can bne expressed by the following pragmatic recipe:

Having a body with a brain embedded in an actual (real) situation S the body (with the brain) can produce symbolic expressions corresponding to certain properties of the situation S.

Assuming that symbolic articulation is possible and that there is some regular mapping between an actual situation S and a set of expressions E it is conceivable to describe the generation of two successive actual states S, S’  as follows:

A device which can operate a simulation is called a simulator ∑. A simulator is either a human actor or a computer with an appropriate algorithm.

As described in the uffmm eJournal  the wider context of this software project is an integrated  engineering theory called Distributed Actor-Actor Interaction [DAAI]. This includes Human Machine Intelligence [HMIntelligence]  as part of Human Machine Interaction [HMI]. In  the section Case Studies of the uffmm eJournal there is also a section about Python co-learning – mainly dealing with python programming – and a section about a web-server with Dragon. This document is part of the Case Studies section.

In the long way of making the theory  as well as the software [SW] more concrete we have reached January 5, 2021 a first published version on [www.]oksimo.com.  This version contains a sub-part of the whole concept which I call here the Minimal Basic Version [MBV] of the osimo SW. This minimal basic will be tested until the end of february 2021. Then we will add stepwise all the other intended features.

If one compares this figure with the figure of the Multi-Group Management from Dec 5, 2020 one can easily detect simplifications for the first modul now called Vision [V] as well as for the last modul called Evaluation [EVAL].

While the basic modules States [S], Change Rules [X] and Simulator [SIM] stayed the same the mentioned first and last module have slightly changed in the sense that they have become simplified.

During the first tests with the oksimo reloaded SW it became clear that for a simulation unified with evaluation  it is sufficient to have at least one vision V to be compared with an actual state S whether parts of the vision V are also part of the state S. This induced the requirement that a vision V has to be understood as a collection of statements where earch statement describes some aspect of a vision as a whole.

Example 1: Thus a global vision of a city to have a ‘Kindergarten’ could be extended with facts like ‘It is free for all children’, ‘I is constructed in an ecological acceptable manner’, …

Example 2: A global vision to have a system interface [SI] for the oksimo reloaded SW could include statements (facts) like: ‘The basic mode is text input in an everyday language’, ‘In an advanced mode you can use speech-recognition tools to enter a text into the system’, ‘The basic mode of the simulation output is text-based’, ‘In an advanced mode you can use text-to-speech SW to allow audio-output of the simulation’, ….

Vision V – Statement S: The citizen which will work with the oksimo reloaded SW has now only to distinguish between the vision V which points into some — as such — unknown future and the given situation S describing some part of the everyday world. The vision with all its possible different partial views (statements, facts) can then be used to a evaluate a given state S whether the vision is already part of it or not. If during a simulation a state S* has been reached and the global vision ‘The city has a Kindergarten’ is part of S*  but not the partial aspects ‘It is free for all children’, ‘I is constructed in an ecological acceptable manner’,  then only one third of the vision has been fulfilled: eval(V,S*)= 33,3 … %. As one can see the amount of vision facts determines the fineness of the evaluation.

Requirements Point of View: In Software Engineering [SWE] and — more general — in Human-Machine Interaction [HMI] as part of System Engineering [SE] the analysis phase is characterized by a list of functional and non-functional requirements [FR, NFR]. Both concepts are in the oksimo SW parts of the vision modul. Everything you think of  to be important for your vision you can write down as some aspect of the vision.  And if you want to structure your vision into several parts you can edit different vision documents which for a simulation can be united to one document again.

Here we present the ideas how to extend the minimal version to a first basic version. At least two more advanced levels will follow. 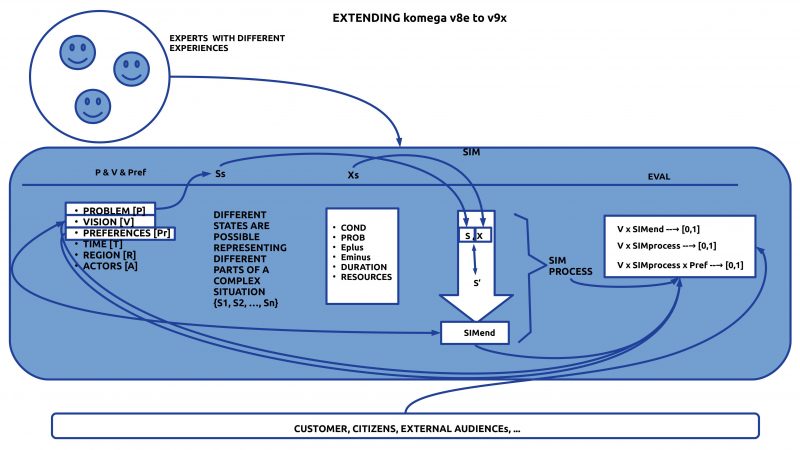 The collection of papers in the Case Studies Section deals with the
possible applications of the general concept of a GCA Generative Cul-
tural Anthropology to all kinds of cultural processes. The GCA paradigm
has been derived from the formalized DAAI Distributed Actor-Actor In-
teraction theory, which in turn is a development based on the common
HMI Human Machine Interaction paradigm reformulated within the Sys-
tems Engineering paradigm. The GCA is a very general and strong theory
paradigm, but, saying this, it is for most people difficult to understand,
because it is highly interdisciplinary, and it needs some formal technical
skills, which are not too common. During the work in the last three
months it became clear, that the original HMI and DAAI approach can
also be understood as the case of something which one could call ACA
Applied Cultural Anthropology as part of an GCA. The concept of ACA
is more or less directly understandable for most people. 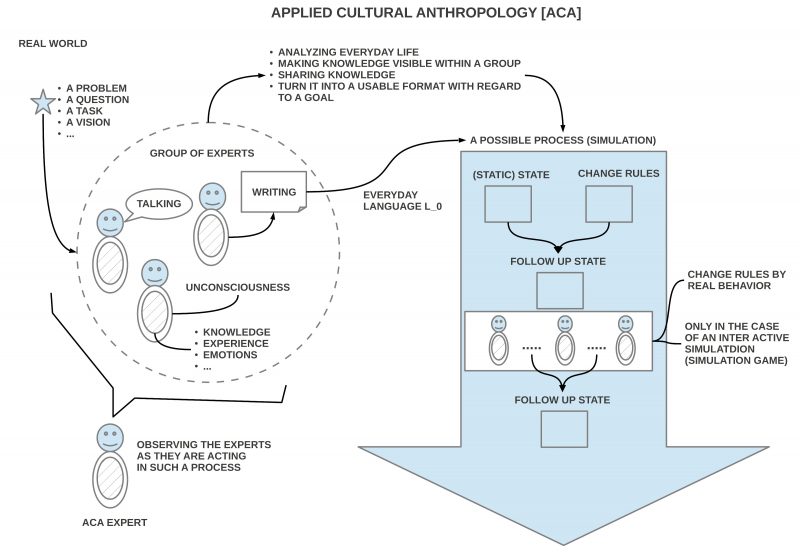