Seen from the users

Eveybody, who has a device, which can be connected to the internet and which owns a browser can address the URL of an oksimo server. There can be multiple users from around the world which can act as a ‘virtual user group’, as a ‘team’.

Every application which can interact with the internet can connect to an oksimo server and send measurment data to the server or can even interact interactively within a simulation acting as a smart actor.

This feature of being capable to use empirical data in real time during a simulation allows  an oksimo application also to function within a smart city environment.

In case of a simulation as HTML-page the user needs a simple simulation application on his own device.

In case of a simulation by server-login the user can simulate and while doing this all additional sources (smart actors, external data-sources, …) can be used.

A user can edit a new simulation with his local device, if there exists a text editor. The edited simulation can be handed out to the local oksimo-server app and can be simulated. In this case no team-work and no usage of external sources is possible.

Being logged-in a user can work together with other users while editing a new simulation. The edited simulation can be started to run every time. Additional external resources can be activated, if these are freely callable. Depending from the osimo server a set of ‘standard smart actors’ is located in the oksimo database and can be activated. 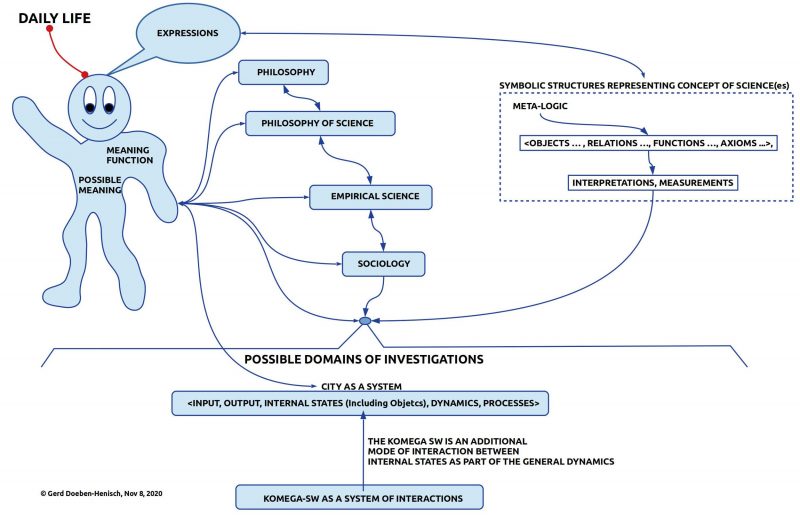 This is the first complete minimal version together with two tests with the German language  as well as with the English language. From now on this ‘starting point’ will be improved step wise until some point in the future.

This file is importing the file kcv8e

If you want to run the program komega-v08e.py which is importing kcv8e.py which in turn is importing the shelve modul under Windows 10 then you have in the file kcv8e.py the last line, where the storage objects initializes three databases:

The reason for this is that the shelve modul is using internally a db-interface which can be differently be implemented on different systems. For windows you need this special Postfix ‘.dat’ to indicate the windows-specific implementation.

These videos show the generation of cases

ATTENTION: The actual Version  you will find HERE.

Update 23.July 2018 (Attaching a new chapter with a Case Study illustrating an actor story (AS). This case study is still unfinished. It is a case study of  a real project!)

Update 13.August 2018 (I am still catched by the chapters 3+4. In chapter  the cognitive structure of the actors has been further enhanced; in chapter 4 a complete example of a mathematical actor story could now been attached.)

Update 14.August 2018 (minor corrections to chapter 4 + 5; change-statements define for each state individual combinatorial spaces (a little bit like a quantum state); whether and how these spaces will be concretized/ realized depends completely from the participating actors)

Update 15.August 2018 (Canceled the appendix with the case study stub and replaced it with an overview for  a supporting software tool which is needed for the real usage of this theory. At the moment it is open who will write the software.)

Update 2.October 2018 (Configuring the whole book now with 3 parts: I. Theory, II. Application, III. Software. Gerd has his focus on part I, Zeynep will focus on part II and ‘somebody’ will focus on part III (in the worst case we will — nevertheless — have a minimal version :-)). For a first quick overview about everything read the ‘Preface’ and the ‘Introduction’.

Update 4.November 2018 (Rewriting the Introduction (and some minor corrections in the Preface). The idea of the rewriting was to address all the topics which will be discussed in the book and pointing out to the logical connections between them. This induces some wrong links in the following chapters, which are not yet updated. Some chapters are yet completely missing. But to improve the clearness of the focus and the logical inter-dependencies helps to elaborate the missing texts a lot. Another change is the wording of the title. Until now it is difficult to find a title which is exactly matching the content. The new proposal shows the focus ‘AAI’ but lists the keywords of the main topics within AAA analysis because these topics are usually not necessarily associated with AAI.)

PRE-VIEW: NEW EXPANDED AAI THEORY 23.January 2019: Outline of the new expanded  AAI Paradigm. Before re-writing the main text with these ideas the new advanced AAI theory will first be tested during the summer 2019 within a lecture with student teams as well as in  several workshops outside the Frankfurt University of Applied Sciences with members of different institutions.